How The Ear Works

The ear is made up of four different parts the Outer Ear, the Middle Ear, the Inner Ear and the Central Auditory Pathways.

A) The Outer Ear:

The outer ear is made up of the part we can see, the Pinna, and includes the ear canal. The outer ear not only helps hold our glasses conveniently in place but primarily serves to gather, funnel, and guide sounds towards the middle ear. Wax or cerumen is normally found in the ear canal. Wax has two important functions, first to help keep the skin moist and second to discourage foreign object from entering the ear. The skin in the ear canal acts in part as a natural cleaning system; it starts growing mainly in the area of the center of the ear drum or Tympanic Membrane and slowly moves or migrates towards the opening of the ear. This is a self cleaning system called epithelial migration. The ear is a wonderful thing that normally cleans itself without outside assistance; never stick things in your ears as this is potentially hazardous. Only a trained specialist should be putting things into your ears.

B) The Middle Ear:

The middle ear is made up of the ear drum, three tiny bones called the ossicles, (commonly known as the hammer, anvil and stirrup), two minute muscles and a tube which connects the middle ear cavity to the back of the throat. The eardrum collects air borne sound waves and turns them into vibrations. These vibrations are then transmitted by the tiny bones to the inner ear.

The muscles in the middle ear act as a very clever tuning and protection system; in a healthy ear they tense up when there is a sudden loud sound. This tensing (known as the acoustic reflex) reduces the amount of sound that is transmitted to the inner ear via a small opening known as the oval window. While the muscles offer a small amount of protection from loud sounds they are in no way a substitute for protecting your hearing from loud sounds. A common type of hearing loss, especially in children, is when the middle ear gets damaged; this is known as a conductive hearing loss.

The inner ear has two divisions, one for hearing and another for balance. The part associated with hearing consists of the cochlear and the nerve of hearing. The cochlear is typically described by its resemblance to a snail shell. It is a bony structure than contains the microscopic sensory cells or hair cells which transform the vibrations they receive into chemical messages which are transmitted by the nerve of hearing to the brain; each cochlear has about 15,000 hairs cells. One of the most common causes of hearing loss is when these tiny hair cells get damaged or break off so can no longer send messages to the brain. This is known as sensorineural hearing loss and is commonly called nerve deafness.

The central auditory pathways consist of a large number of neural pathways in the brain. These are responsible for your ability to work out where a sound is coming from (localisation), be able to filter out the noise from what you want to hear and even your ability to perceive and appreciate music.

In summary the ear collects air borne sound waves and transforms them first into mechanical energy through the middle ear, then into hydraulic energy by the connection between the middle and inner ears and finally into chemical energy by the hair cells which is transmitted to our brain by the auditory nerve where it is perceived as speech or sound. 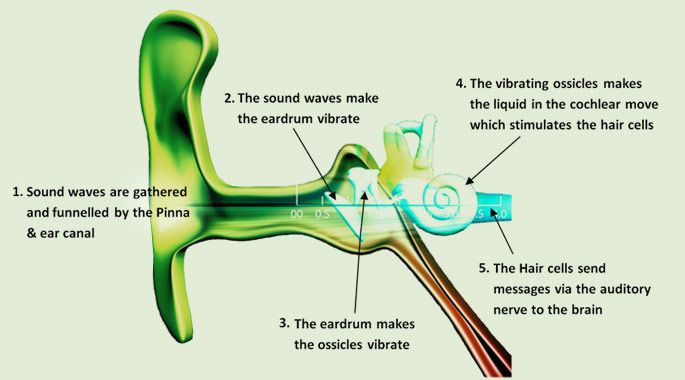 The result of any part of the hearing system breaking down is that the messages reaching the brain are reduced or distorted. Reducing the amount or quality of information received by the brain will result in a reduction in what is heard and can lead to messages getting missed or misunderstood.